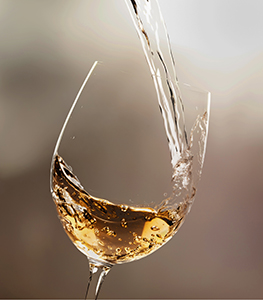 So perfumed with honey, melon, lilac flower and cooked apple aromas. Just a hint of cream. Full body yet linear and racy with a bright and intense acidity. Very energetic and powerful. Dense and layered. It rolls off the palate and grabs your attention. Best white of Chile this year for the second year in a row. Electric. Drink now or hold.

I had the luck of tasting two vintages of the Chardonnay from slate/schist soils side by side, including the 2016 Aconcagua Costa "Las Pizarras" Chardonnay. The juice from the whole clusters decanted for 24 hours, fermented in oak barrels with indigenous yeasts and then aged in barriques for 14 months. It's a little more compressed than the 2017 and has good, vibrant flavors with some floral notes and some gentler flavors, perhaps more similar to the 2014, with the austere schist minerality but with more volume and juicy fruit. There is a little more malolactic in this year. If people have the idea that 2015 is warmer than 2016 and that 2017 is again warmer, the character of these Aconcagua Costa bottlings is the opposite: 2015 and 2017 are fresher, and 2016 is a little warmer. This sometimes happens, as the cooler years are harvested later and the warmer ones see an earlier harvest, so that the wines are exactly the opposite of what you expect. This is great, and its only problem is being tasted next to the 2017, which is otherworldly. 5,000 bottles were filled in May 2017.

95
Luis Gutierrez, Wine Advocate (239), October 2018
Please note that these tasting notes/scores are not intended to be exhaustive and in some cases they may not be the most recently published figures. However, we always do our best to add latest scores and reviews when these come to our attention. We advise customers who wish to purchase wines based simply on critical reviews to carry out further research into the latest reports.
Follow Us