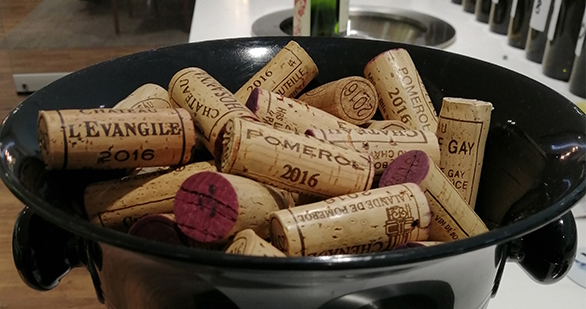 A Bordeaux vintage is first judged by critics and merchants when the wines are still in barrel – over a year before bottling. The second judgement is straight after bottling and for us, the most interesting and relevant assessment of the quality of the wines is after they have had a chance to settle down for a year or so.

In our opinion, Neal Martin is the world’s foremost critic of Bordeaux wines. Selected by Robert Parker to be his successor at The Wine Advocate, he later jumped ship to rival publication Vinous where he has just published his report on the famous 2016 Bordeaux vintage following the Southwold blind tasting in early 2020. Does 2016 live up to the hype? Is this one of the greatest vintages of our times? It seems that the answer is a resounding YES.

Neal compares 2016 to the “pantheon of revered vintages” 2005, 2009 and 2010. However he describes 2016 as being “cut from a different cloth”. He believes that after these blockbuster years, 2016 “is more about purity, pitch-perfect acidity and, especially, a cashmere texture.” Words like “silky” and “harmonious” appear consistently in his notes and he seems to prefer the texture and approachability of 2016 to the style of those previous three classic years. He believes that 2016 is an “exemplar” and will become the benchmark to which subsequent vintages will be compared. He concludes by talking about it in the same breath as two other legends of their time - 1959 and 1982.

This is an extremely positive report on what we believe to be Bordeaux’s greatest modern vintage. Neal Martin described it originally as a “fantastic, sublime and at times entrancing vintage” and he adds today “I have found no reason to alter that view”. His report can be read here (subscription required) Southwold: 2016 Bordeaux Blind.

Those of you who bought 2016 Bordeaux en primeur can rest assured that you have some truly fabulous wines to drink over the coming years and for those who are yet to buy – or wish to top up your collections – we have selected three of the highest rated wines in this new report that offer the consumer the best value for money as well as a perfect 100 pointer.

2016 Meyney is a wine that Neal Martin declares to be “only a couple of steps behind the two titans of Saint Estèphe”. When one considers that Cos d’Estournel and Montrose sell for around five times the price, this seems like the deal of the vintage to us. Meyney 2016 has the same 95 point rating as Léoville Barton and Les Forts de Latour but at £320 per dozen it is a brilliant bargain. We also have magnums, double magnums and imperials.

2016 Lafon Rochet is a wine that “hugely impressed” Neal Martin. He describes it as “one of the best wines that this Estate has ever produced”. At a special price of £365 per dozen this classed growth Saint Estèphe offers great value for money.

2016 Grand-Puy-Lacoste achieves “First Growth quality in all but name.” With a 97 point rating this wine is in a dead-heat tie with Lafite (£6000 per dozen) and outscores Haut Brion (£4825 per dozen). At £660 per dozen this is a truly great claret that more than stands up to the superstar legends of Bordeaux - but is still available at a bargain price.

And finally, we are pleased to offer the only wine of the vintage to receive a perfect score of 100 points - Cos d'Estournel at £1620 per dozen. Neal has tasted this wine several times and whilst this most recent tasting showed it had begun to shut down, he said that after some decanting it "revealed the Cos d'Estournel that has amazed since I first tasted it out of barrel."

Minimum Order – 1 case
All wines are in stock, immediately available for delivery

"The 2016 Meyney has a very deep color. The bouquet is a stunner, delivering intense, mineral-rich black fruit pixelated to the nth degree. This is extremely focused and conveys the energy of a tightly coiled spring. The extremely well-balanced palate offers fine-grained tannins and superb acidity. Very pure and focused, with a harmonious, vibrant finish that lingers in the mouth. You can feel this lingering 45–60 seconds after the wine has exited. Wonderful. Tasted blind at the Southwold tasting. 2026 - 2050"

"The 2016 Lafon-Rochet has a very engaging bouquet, a mixture of red and black fruit laced with pencil shavings and loamy scents. In fact, the more you nose this wine, the more its complexity becomes apparent. The palate is medium-bodied with supple tannins and a fine line of acidity, ripe and generous yet maintaining outstanding tension and revealing a judicious touch of peppercorns on the finish, which fans out gloriously. This is a fabulous Lafon-Rochet and certainly the best bottle of 2016 that I have encountered. Tasted blind at the Southwold tasting. 2021 - 2040"

"The 2016 Grand Puy-Lacoste has a clean, precise bouquet with nicely detailed blackberry, briar and tobacco aromas, touches of mint emerging with time, all utterly charming. The palate is medium-bodied with supple tannins and a fine bead of acidity, conveying a sense of symmetry throughout and leading into a deft, quite persistent finish. This is very classy, and it should age with style. Tasted blind at the Southwold tasting. 2023 - 2055"

"In my last sighted review of the 2016 Cos d’Estournel, I wrote: "I suspect it will close down for a period in its youth." Perhaps it is already beginning to shut down, because though this wine was deeply impressive, it fell just a notch short of ethereal previous bottles, despite its "pixelated black fruit" on the nose and "sublime balance" on the palate. I tasted the wine twice thereafter, though this time with a 4-6 hour decant, and this revealed the Cos d'Estournel that has amazed since I first tasted it out of barrel. 2030 - 2070"

"The 2016 Cos d’Estournel was a bona fide showstopper out of barrel, the best that I had encountered in over 20 years of visiting the estate during en primeur, so my expectations were piled high when I returned to find out how it performs in bottle. Deep, almost opaque in color, it sports a very intense but broody bouquet with fathomless deep black fruit tinged with blueberry and violet. The aromas almost seem to envelop the senses. The palate is medium-bodied with ultra-fine tannin that I have never witnessed in any other vintage of Cos d’Estournel. There is a beguiling symmetry to this Saint-Estèphe, as well as unerring mineralité. The persistent, tobacco-tinged finish can be felt 60 second after the wine has departed. This is a monumental, benchmark Cos d’Estournel that will give not years but decades of pleasure, though I suspect it will close down for a period in its youth, hence my drinking window. 13.07% alcohol.  Drink 2030-2070"

Minimum Order – 1 case
All wines are in stock, immediately available for delivery