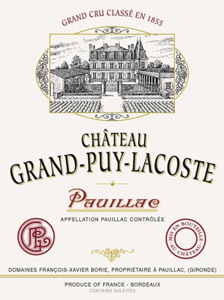 Along with the 1982, 2000, and 2005, the 1990 is one of those monumental Grand Puy Lacostes that you can't have enough of. Still inky/blue/purple-colored to the rim, it boasts a gorgeously sweet, pure nose of creme de cassis, spring flowers, and a hint of wet rocks. The wine is full-bodied, plush, and expansive with impressive levels of glycerin and purity as well as an endearing texture. This 1990 is evolving at a glacial pace, but the sweetness of the tannins and low acidity ensure a delicious treat whenever a bottle is opened. It should evolve for another 20-25 years.

Although I have always rated the 1990 higher than the 1989, I was stunned by just how fabulous the wine was showing in my tasting in late 1996. It possesses an opaque ruby/purple color, as well as a stunning nose of jammy blackcurrants, cedar, spice, and smoke. Full-bodied, with magnificent extract, excellent delineation, outstanding purity, and layers of intensity, this massive, dense, well-balanced Pauillac is the finest Grand-Puy-Lacoste since the 1982. Anticipated maturity: 1998-2015.

Tasted at the chateau, this has a deep garnet core. The nose is very tight at first, over-shadowed by the more ebullient ’98 at first although it begins to unfurl with aeration and evolves some lovely ripe blackberry, cedar, briary and iodine tinged fruits, the bouquet eschewing any hot summer fruit characteristics. The palate is full-bodied with a firm tannic structure matched by its admirable fruit concentration and its acidity that lends it so much freshness and vitality. Great weight, this reminds me of the awesome ’82 that is now only just beginning to drink. Blackberry, raspberry and just a touch of savoury fruit on the long, masculine finish. An outstanding ’90, but for those with patience, this will be a Pauillac to treasure for the next 20 years. Tasted April 2008.

18
Jancis Robinson MW, JancisRobinson.com, April 2010
Read more tasting notes...
16
Group Tasting, Blind 1990 Tasting, September 2000
Please note that these tasting notes/scores are not intended to be exhaustive and in some cases they may not be the most recently published figures. However, we always do our best to add latest scores and reviews when these come to our attention. We advise customers who wish to purchase wines based simply on critical reviews to carry out further research into the latest reports.
Follow Us