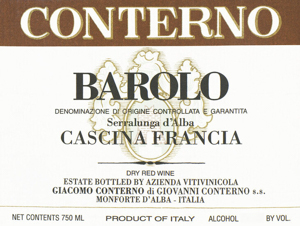 The 2007 Barolo Cascina Francia is an unusual version of this benchmark wine. In 2007 Conterno decided against bottling his Monfortino. Conterno believes Nebbiolo can handle rain and humidity (hence his decision to make Monfortino in rainy years such as 1987 and 2002), but not drought. The result is a Cascina Francia that is unusually dark, rich and powerful. The floral, herbal notes that are typical in young Cascina Francia have been replaced by deeper notes of tar, smoke and licorice to match the layers of intense dark fruit. The 2007 is powerful and imposing from start to finish. It is going to be a fascinating Barolo to follow over the coming years and decades. Cascina Francia is often accessible for the first year or two after it has been bottled. That has not been my experience with the 2007. It seems already headed for a period of dormancy. Anticipated maturity: 2017-2037.

96+
Antonio Galloni, Wine Advocate (197), October 2011
Please note that these tasting notes/scores are not intended to be exhaustive and in some cases they may not be the most recently published figures. However, we always do our best to add latest scores and reviews when these come to our attention. We advise customers who wish to purchase wines based simply on critical reviews to carry out further research into the latest reports.
Follow Us