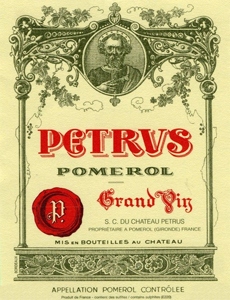 A prodigious Petrus, this wine has that extra level of intensity and complexity that is monumental. The magic is clearly Petrus, and the 2000 will always be an interesting vintage to compare to another legend in the making, the 1998, or more recently, of course, the 2005, 2008, and 2009. Extremely full-bodied, with great fruit purity, an unmistakable note of underbrush, black truffle, intense black cherries, licorice, and mulberry, the wine seems to show no evidence of oak whatsoever. It has a sumptuous, unctuous texture, plenty of tannin, but also vibrancy and brightness. This is a remarkable wine that seems slightly more structured and massive than the 1998, which comes across as slightly more seamless, as if it were haute couture. This wine needs at least another 5-10 years of cellaring and should age for 50+ years.

How could this not make it to my Wines of the Year list? Tasted back in March, when I became the only journalist at what has to be the wine event of the year - the unveiling of a bottle of Petrus that had spent 438 days on the International Space Station. We compared it against the same bottle that had remained on Earth, and in the interest of actually suggesting wines you might be able to get hold of, this tasting note comes from the terrestrial version. It's a wine that feels like an occasion in itself, so nuanced and effortlessly impressive. Still young even at 21 years old, although now showcasing the waves of rose petal, violet and peony aromatics that only really come out in Petrus once it has had serious bottle age. The palate is pure velvet - blackberry, black cherry and bilberry fruits penned in by muscular but welcoming tannins, all finishing up with black pepper and a hit of spiced chocolate shavings. 50% new oak.

A magical effort from Petrus, the 2000 has continued to gain weight and stature. From the bottle, it is a perfect wine, much like the 1998. The color is inky plum/purple to the rim and the nose, which starts slowly, begins to roar after several minutes, offering up scents of smoke, blackberries, cherries, licorice, and an unmistakable truffle/underbrush element. On the palate, this enormous effort is reminiscent of dry vintage port, with fabulous ripeness, a huge, unctuous texture, enormous body, and a colossal 65-second finish. I did not have the benefit of tasting it side by side with the equally perfect 1998, but it appears the 2000 is a more massive, macho/masculine wine, with more obvious tannin and structure than the seamless 1998. It is another wine to add to the legacy of the great vintages of Petrus. Anticipated maturity: 2015-2050.

NOTE: The passing of a legend. Jean-Pierre Moueix, 1913-2003, passed away the weekend of March 29-30. A noble and erudite man, he single-handedly established the reputation for Pomerol. Founding his negociant firm in Libourne in 1937, he developed a marketplace in Belgium and northern Europe for many of the area's greatest wines. His success led to the purchase of many of the better vineyards, most renowned of which were Trotanoy (1953), La Fleur-Petrus (1953), Magdelaine (1954), and Petrus, partially owned until its outright acquisition in 2002.

Jean-Pierre Moueix and his two sons, Christian and Jean-Francois, were the cornerstones of my early education of the wines of Pomerol. As a beneficiary of his wisdom and generosity, I shall always remember him as a visionary as well as a great man. His death symbolizes the end of an extraordinary life and era.