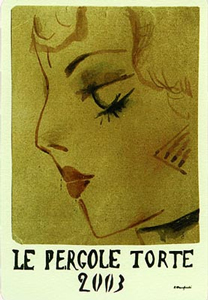 Rich and powerful, but also wonderfully open, the 2003 Le Pergole Torte, as it is a resounding success in a year that presented huge challenges because of the scorching hot temperatures. It is also interesting to taste the 2003 next to the 2000 and 1997, two vintages that were also dry and hot, as the winemaking team was clearly in a better position to deal with the conditions than it was in either 1997 or 2000. I won’t be surprised if at some point, the 2003 evolves quickly, but today it is absolutely delicious. "Two thousand three was the earliest harvest in the estate's history," says Martino Manetti." We had fifty days of uninterrupted heat and 12 days above 40C (104F). The grapes were so dehydrated we had to tighten the grills of the destemmer, otherwise all the grapes would have fallen through." 2015-2025

Wines like this are so very rewarding. This was a difficult vintage, and you could instinctively downgrade a wine from such a scorching hot growing season. Instead, the 2003 Le Pergole Torte delivers unexpected surprises. It meets the high-quality bar achieved at Montevertine. With fruit picked on September 22, this vintage represents the estate's earliest harvest. This is also the Le Pergole Torte with the lowest acidity ever made. Despite these red flags, the wine delivers a full bouquet with dark mineral notes, succulent fruit, plum and prune. You also get hints of dry hay, black olive and campfire ash. One basic truth remains: By all accounts, this wine should be dead by now. Instead, there is life left within. 2018-2028

93
Monica Larner, Wine Advocate, March 2018
Please note that these tasting notes/scores are not intended to be exhaustive and in some cases they may not be the most recently published figures. However, we always do our best to add latest scores and reviews when these come to our attention. We advise customers who wish to purchase wines based simply on critical reviews to carry out further research into the latest reports.
Follow Us