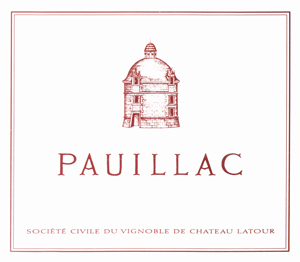 View all vintages of this wine | View all wines by Latour

The best Pauillac I ever tasted (and this wine has been a revelation ever since they first introduced it), the 2010 from Latour represents 24% of their production. It is a blend of 55% Cabernet Sauvignon, 44.5% Merlot and .5% Cabernet Franc. An amazingly opulent, round, delicious wine, and a great buy when they finally release it – assuming it comes in under a three-digit price – it possesses wonderfully silky tannins, classic black currant, cedar wood and forest floor notes, and rich, full-bodied opulence as well as a terrific purity and palate presence. It should drink well for 10-15+ years.

Look very much older than the 2011. Still very deep crimson with a very evolved rim. Dense and leathery and as though there were a lot of press wine in this.

55% Cabernet Sauvignon, 45% Merlot with a drop of Cabernet Franc. 24% of production. 22% press wine. Not released en primeur. Aimed at restaurants. ‘This wine should be drunk and peed within six months of release,’ is Frédéric Engerer’s less-than-elegant way of describing the market positioning of this wine. He will release the 2006 this year – to quite a few merchants in the UK. It is not sold en primeur. Very deep crimson. Much more Merlot than the other cuvées here. Immediately very dry and subtle after all the southern Médocs and St-Juliens I have just been tasting. Minerals immediately. And then so round and luscious on the palate even in this supposedly (relatively) lowly third wine. Very well-managed tannins – how do they do it? Some reduction. Always last to be drawn because the grand vin is blended first. Very dry, slightly stolid sudden finish – that’s the only thing that lets this wine down a little bit.

17
Jancis Robinson MW, JancisRobinson.com, April 2011
Please note that these tasting notes/scores are not intended to be exhaustive and in some cases they may not be the most recently published figures. However, we always do our best to add latest scores and reviews when these come to our attention. We advise customers who wish to purchase wines based simply on critical reviews to carry out further research into the latest reports.
Follow Us