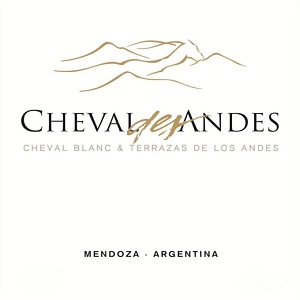 Fabulous aromas of blackberry, spice and flower. Perfumed. Lavender, rose and lilac too. A wine that grows on the palate with extreme finesse and complexity that shows ultra-fine tannins, currants, and flowers. Super length. Mostly mablec with cabernet sauvignon and petit verdot. Best Cheval des Andes ever? Drink or hold.

2012 was a warmer vintage but they harvested earlier to preserve freshness. The 2012 Cheval des Andes has more floral notes (that they attribute to the early picking) violets and lilies. While the blackberries and blackcurrants are there, they do not overpower the nose. In this vintage the final blend (which changes every year, they have no rules) was 64% Malbec, 28% Cabernet Sauvignon (a higher percentage to provide freshness in this warmer vintage) and then 8% Petit Verdot. This is a hedonistic Cheval showing the character of the vintage but with better balance and more integrated oak than in the earlier releases. They reduced the percentage of new oak to 30% and also started experimenting with some 500-liter barrels that were widely used in 2014, and the aging was longer at 14 months. The palate is powerful, and to drink at around 15 C. It gets more depth and nuanced with time in the glass. Even if young, this is polished and can be drunk starting now. 68,000 bottles were produced in 2012.

93
Michael Schachner, Wine Enthusiast, January 2016
Please note that these tasting notes/scores are not intended to be exhaustive and in some cases they may not be the most recently published figures. However, we always do our best to add latest scores and reviews when these come to our attention. We advise customers who wish to purchase wines based simply on critical reviews to carry out further research into the latest reports.
Follow Us